Most women give birth in hospitals, institutions modelled around the needs of the people who work there. The delivery room is dominated by the obstetric bed which was designed for the benefit of the obstetrician rather than the woman giving birth. Despite research showing the benefit of upright positions in labour and birth, most women in the UK still give birth in the semi-reclined position, pushing their baby out against the forces of gravity. Jowitt argues that unnatural positions make labour and birth more painful and difficult for modern women than it was for their ancestors. How did we come to put the needs of care givers above those of the labouring woman? Is there anything that can be done?

Starting with a short history of birth furniture, Dynamic Positions in Birth goes on to explore the anatomy and physiology of labour from an evolutionary perspective. This updated edition expands Jowitt's new biomechanical model of how the uterus works first aired in the British Journal of Obstetrics and Gynaecology in 2018 which has profound implications for giving mothers freedom of movement in labour and birth. It explores how rethinking positions for labour and birth could benefit mothers and their babies.

Equally important is the need to change attitudes to birth so that women are encouraged to play a more active part in the birth of their babies instead of being subjected to clinical interventions designed to mitigate the adverse effects of labouring in a starkly unnatural environment. Jowitt argues that it is possible to give women labouring in hospital a better chance of giving birth naturally. The book concludes by calling for a fresh look at the environment for birth. Delivery rooms can be made more user friendly by introducing furniture designed around women’s need for physical support during labour as well as for the birth, and by hiding away the more alarming technology unless it is needed. Women need a less forbidding environment and more encouragement to move freely and adopt positions which will enhance their chance of achieving a normal birth. 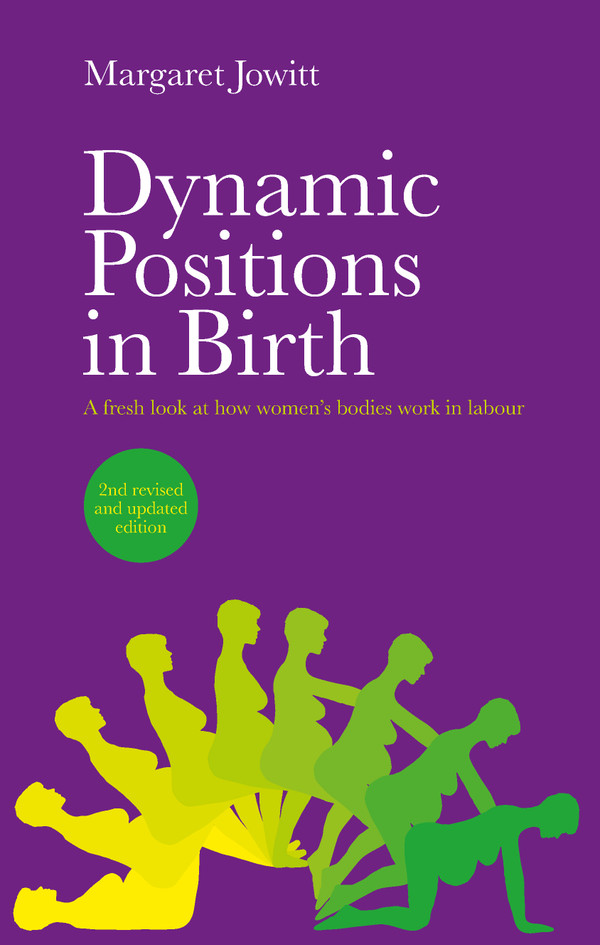 A manifesto on upright birthing!

You will have probably heard that upright positions are better during birth. Many birth related books may have given some basic understanding into why that may be so. But, unlike many books on birthing, Dynamic Positions in Birth gets into the specific nature of our pelvis, uterus and is a well thought through model for understanding the anatomical, physiological and biomechanical fundamentals on birth. This is a highly structured, in depth thesis on what happens to the female birthing seat in labour and also why. If you are a professional in the field of birthing and you spend your time thinking and talking about the female pelvis, her uterus and the nature of birth then this book has to become a staple on your desk. Very rarely do I come across a packed volume that has so many amazing points of thought and study. My copy is now bulging with sticky notes and annotations that only speak of the book’s capacity to educate. Margaret Jowitt has left no aspect of her focused study on the uterus and pelvis at birth uncovered. But what makes this book superior to a textbook is that right from the beginning you know her grasp on the topic is so steely that it is practically impossible for her to write a dry sentence. I have loved reading this book less as an educational text and almost devoured huge sections of the book and re-read them to really get the most of the information in here. The book starts with some amusing history of birth furniture and Margaret’s own commentary too is very entertaining. For example, she comments on the how a museum curator might have not grasped the nature of birth in the modelling. The history itself makes such a great case for upright birthing before the advent of supine birthing positions became the norm. Margaret then lays out a good selection of evidence that is very convincing in staying upright for birth but laments on interesting research ideas that have not been explored. However, most research though very valid is dated now and it would have been a great opportunity to update the readers of the second edition on any new and emerging research in the area. My favourite part of the book is the meaty sections on the uterus and how the choreography of labour and birth plays out and the importance of maternal and foetal positioning in the whole scenario. The sections discussing the pelvis are full of amazing ah ha moments. I have read a few anthropological accounts of the evolution of the human pelvis and the reasons given and I think Margaret connects the dots very well. The book then touches upon some of the challenges during birth and finally discusses some options on how birth can be made better and safer for both mother and baby. I thoroughly enjoyed learning from this book. It has enhanced my own practice, my training programmes for other perinatal yoga teachers and my love for birth related study materials. If you want to learn deeply about how birth is designed to happen and you are not put off by some good academic evidenced based information then don’t hesitate to buy this book.